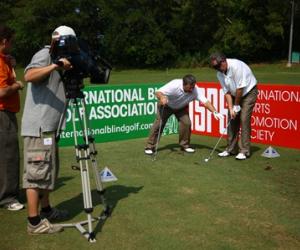 Golf is a sport which can be played by anyone regardless of age, gender, ability or disability.

Most people will think it is essential to have good eyesight to play golf but that is not true. Totally blind and visually impaired golfers, with the assistance of their coaches/guides are able to enjoy the friendship and exercise the game provides - but most of all the thrill of hitting a good shot. There is also the challenge of competition against other blind golfers as well as enabling them to compete with fully sighted players using the handicapping schemes.

The first record of a blind man playing golf dates back to 1924 in Duluth, Minnesota. Clint Russell lost his eyesight in an accident but continued to play golf. In 1930 it is recorded he shot a brilliant 84 for 18 holes. It is known that others played and in the early 1950s blind golf associations were established in Canada and the USA. Later, in the 1980s organisations were set up in the United Kingdom, Japan and Australia.

In 1998 the IBGA was formed to set conditions, sanction and provide funding for international open blind golf events. Prior to 1998 national associations had organised regular open championships and each time these received substantial funding from a Japanese business man Dr Haruhisa Handa. Dr Handa had been inspired when playing golf with a blind golfer in Australia.

He felt it would be better if instead of him dealing with applications for funding a body representing all the national associations should take on this role. In 1997 representatives from six countries met in Perth, Western Australia, to draw up a Constitution and Handicap Scheme for such an organisation. These were agreed in 1998 at the World Blind Golf Championships held in Florida, USA and the International Blind Golf Association was born.

Dr Handa, Honorary President, continues to provide financial support to the IBGA and through it to competitions around the world. Each year six or seven national open championships take place and every two years the World Blind Golf Championships are held. The most recent took place in Australia in 2014 and in 2016 this tournament will be staged in Japan.

Currently in the 16 member national associations there are about 400 registered blind golfers. In addition there are individual associate members from a further 2 countries. The IBGA would like to see these numbers grow and is also involved in a bid to introduce disabled or paragolf into the Paralympics in the future.

As you move through the pages of this web site you will find information about the sport and those who play it. You will also find contact information where you can learn more about blind golf and hopefully become involved yourself. If you know someone who may be interested, please let them know about this website.