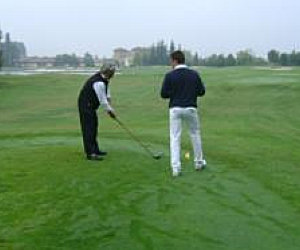 Andrea Calcaterra from Milan, Italy, belongs to a family who have been involved in golf for 4 generations.

He started playing golf at the age of 9 and his handicap continually improved, eventually playing off 3. In the late 1990s he lost his eyesight and stopped playing. In 2001 he restarted playing, initially as a joke but quickly realised he could play and enjoy 18 holes.

In 2007 he became an associate member of IBGA and the following year affiliated Italy as a full member of IBGA. Andrea was elected as an IBGA Director in 2010. That year he and his team organised the first ever Italian Blind Golf Open introducing golf to blind people in Italy. In 2011 he also organized the first clinic for blind golfers at the Milan institute.

He has participated in three British Blind Golf Opens since 2009, the World Championships in England in 2010 and the Italian Blind Open in October 2010.

His commitment is to enlarge the practice of golf among Italian athletes and contribute to the progress of IBGA throughout the world participating in international events and improving relationships among member country.